Commercial Awareness Breakdown deconstructs three of the week's commercial stories in an understandable and jargon-free manner. Terms bolded and underlined may be more difficult to understand and are explained at the bottom.

Unsure about what exactly commercial awareness is? Click here to find out. 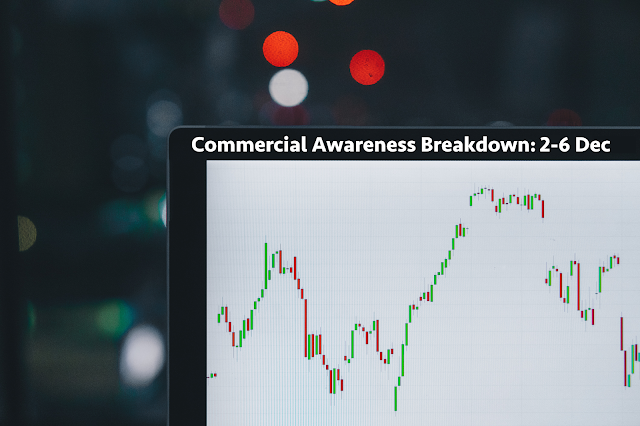 Hedge fund TCI (The Children's Investment Fund Management) has explained plans to punish the directors of companies that fail to meet certain climate change disclosure requirements - specifically regarding carbon dioxide emissions. TCI has $28 billion under its management and is well known for being an activist fund. It is clear that investors are becoming ever more concerned about how climate concerns affect their portfolios, with companies such as Airbus and Charter Communications being warned that, if failing to disclose carbon dioxide information, the fund will vote against their directors.

TCI has even suggested that asset owners should fire fund managers not insisting on disclosure and transparency, with the fund's manager Sir Christoper Hohn criticising BlackRock, the world's largest asset management firm, for so-called 'greenwash[ing]'. Climate disclosure is currently not mandatory, however it is currently being considered by London regulators. In spite of this, Hohn notes that investors should consider forcing it themselves, even if the governments won't take action.

TCI has seen its main fund rise by 39% this year, and uses the non-profit consultancy CDP to process and publish emissions data. TCI is not, however, the first hedge fund to operate an activist approach to climate change. Funds such as Vanguard, BlackRock, State Street and Fidelity have all claimed to champion environmental causes. This has, however, been met with criticism and doubt by many environmental campaigners.

Recent studies from Goldman Sachs seemingly show investors increasingly wanting to use their powers for good. It is reported that, since 2016, over $8 trillion has been paid into "ESG" funds, who decide investments based on environmental, social and governance factors. The main focus of these investments seems to be on firms looking to make an impact and make the world better, instead of firms merely operating in a greener fashion.

It may be that a new approach to the fight against climate change is through the wealth and power of hedge funds - perhaps Hohn's calls for stricter pollution disclosure will be the drive for regulators to make this a requirement.

44% of all legal-tech start-ups across Europe are based in the UK, making it a significant hub for the future of lawtech (legal technology). These startups normally involve the use of AI (artificial intelligence) to automate the more routine areas of legal work (i.e. document searches). In a way similar to fintech (financial technology) startups, these small companies often try to break their way in to and offer new alternatives to the traditional models of larger law firms.

According to TheCityUK, investment in legal technology has soared recently, with the £2.5 million of investment in 2016 rising to £61 million in 2018. Furthermore, revenues are now at a massive £35.5 billion. It is not just smaller startups who are succeeding in this market, big city law firms are also establishing hubs and labs aiming at developing and implementing legal technology.

Despite offering benefits for law firms, advancements in lawtech also offer benefits for the general population. Josh Browder's tool 'DoNotSign' allows users to digitally scan and upload contracts, identifying legal loopholes and potentially unfair clauses. Browder's technological innovations have secured over £4 million in investments, and may have massive benefits for access to justice and unfair contracts.

A question on many minds is whether lawtech will eventually replace the role of the lawyer. Despite the massive growth of this sector, it seems the tool will find most of its use in replacing the more basic work, such as document searching and research. It seems unlikely that the entire role of the lawyer can be replaced by technology. However, this is a question only time can fully answer.

Saudi Aramco, a state-owned oil company with a valuation of $1.7 trillion, has raised $25.6 billion in its initial public offering (IPO) (selling about 1.5% of the company), making it the largest IPO in history, breaking the record set by China's Alibaba in 2014.

Crown Prince Mohammed bin Salman had hoped for a valuation more along the lines of $2 trillion, however the $1.7 trillion valuation achieved will certainly help Prince Mohammed's goal of transforming, and keeping relevant, an oil-based economy existing in an ever greener world.

Saudi Arabia, which controls the second-largest crude oil reserves in the world, has recently been involved with discussions in Vienna aimed at restricting oil production and, hopefully, supporting international crude oil prices. These discussions are reportedly aiming to cut supplies by a further 500,000 barrels a day, with restrictions of 1.2 million per day already in place. Cutting production will, the providers hope, increase barrel prices, thus helping increase the share price of Saudi Armaco.

The vast majority of IPO investments came from inside Saudi Arabia, with foreign investors having indicated their hesitation at investing in Saudi Armaco, due mainly to governance and geopolitical concerns. That said, Wall Street's largest banks were still keen to get involved, advising the company maintain a safe, less risky approach to its IPO.

Despite not reaching Prince Mohammed's ambitions, the IPO raised more than that of the five next biggest oil companies combined. It appears that the trend towards environmentally-aware investment has not really affected the oil market, whether this trend will ever permeate into this sphere is difficult to tell.
__________________________________

Access to Justice - The ability for those in need to be able to find justice. This includes, but is not limited to, access to Courts and legal representation.

Balance Sheet - A statement of capital and interests of a business.

Clause - A particular section of a contract.

Director - A director runs the day-to-day operations of a company.

Disclosure Requirements - A body of rules outlining when certain information must be shared.

FinTech - The crossover between finance and technology - often involving the use of technology for banking.

Governance - The action of governing/controlling a state.

Greenwashing - This occurs when a company conveys the false impression that its operations are environmentally friendly.

Hedge Fund - An investment fund which takes assets from various investors and pools it into a variety of assets.

Initial Public Offering - Stocks (financial units of ownership interest in a company) are offered (for the first time) for the public to buy on a stock exchange - this is often used as a method of raising cash in a company.

Portfolios - A collection of investments held by a fund, institution or individual.

Share Price - The price of a single unit of ownership interest in a company. The share price is an indication of a company's valuation, and will rise and fall depending on a variety of factors, including the company's performance.

Valuation - The process of determining the overall economic value of a business.