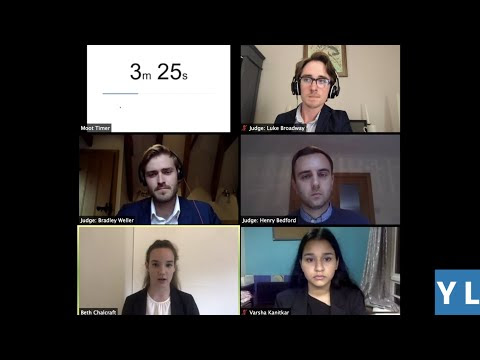 Please find above the recording of the Youth Law virtual fintech moot final, which took place on Wednesday the 15th of July 2020. The moot problem question used throughout the competition is available here . For more information, please click here or  visit youthlawmoot.co.uk .
Read more

Results of the 2020 Virtual FinTech Moot! 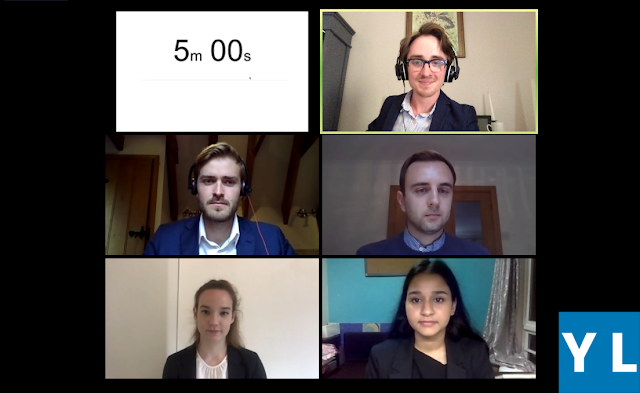 Yesterday afternoon marked the end of the inaugural Youth Law Virtual FinTech Moot. After excellent performances from all competitors I am thrilled to announce Varsha Kanitkar as the competition's winner, as well as Beth Chalcraft who came in a very close second!  Over the course of the competition between the 11th and 15th of July, myself and my fellow judges were fortunate enough to hear some truly outstanding moots. The competition took place over five knockout rounds, with round one taking place on Saturday the 11th. From this, 16 competitors were selected to take place in round two on the morning of Monday the 13th, with a further 8 making it to Monday's afternoon session for round three. The winning four from round three mooted again on the morning of Wednesday the 15th for the semi-finals, with the final two going forward to the finals on Wednesday afternoon.  Considering competitors only had a week and a half to prepare for both appellant and respondent, the qu
Read more 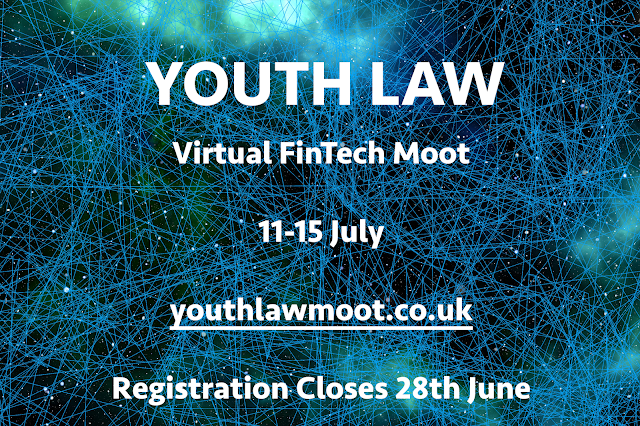 I am very excited to announce the Youth Law Virtual FinTech Moot! It is important to maintain advocacy skills in these unusual times, and as a result Youth Law will be running a free virtual moot,  open to all undergraduate students regardless of university, course or experience. The problem question will focus on an area of fundamental contract law set against a FinTech context. The competition itself will take place over three days (11th, 13th and 15th of July), and will consist of 5 rounds. The target size for the first round of the competition is 32 competitors, which, through a knockout structure, will result in a winner after round five. Submissions will last 5 minutes, and will be judged primarily by experienced student judges. For more information and registration, please visit youthlawmoot.co.uk . Registration is open until the 28th of June at 9pm .  If you have any questions, please feel free to get in touch through the contact page! Many thanks to John Dove of  @
Read more 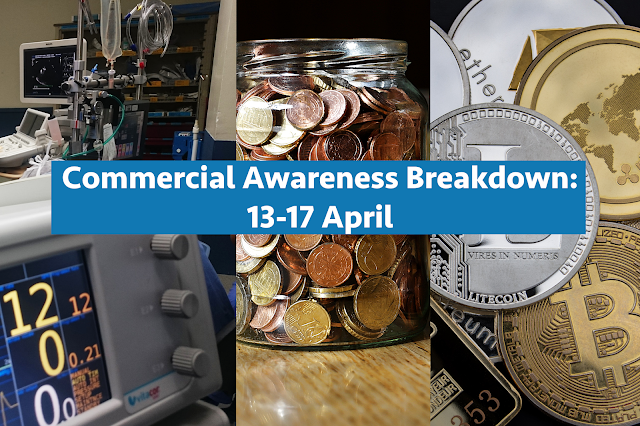 Manufacturer Liability, Pensions and Facebook Libra Commercial Awareness Breakdown deconstructs three of the week's commercial stories in an understandable and jargon-free manner. Terms bolded and underlined may be more difficult to understand and are explained at the bottom. Unsure about what exactly commercial awareness is?  Click here to find out . 1)  Manufacturer Liability The UK Government has announced that manufacturers will be protected against legal claims arising from the supply of ventilators. Hospitals fighting the virus are in need of ventilators, and shielding the manufacturers from potential intellectual property or personal injury   liability should encourage more suppliers to step up and meet demands. A number of suppliers have responded to the government's requests for ventilators, including vacuum cleaner manufacturer Dyson , who's Co-Vent system will be designed and created from scratch. Ministers   now estimate that th
Read more 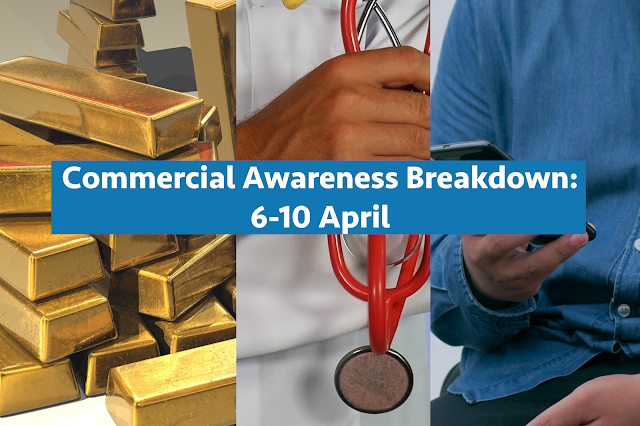 Gold, NMC Health and Quibi Commercial Awareness Breakdown deconstructs three of the week's commercial stories in an understandable and jargon-free manner. Terms bolded and underlined may be more difficult to understand and are explained at the bottom. Unsure about what exactly commercial awareness is?  Click here to find out . 1) Gold Despite the huge financial devastation caused by the Covid-19 outbreak, one commodity has shown its strength in times of crisis. With stocks having dropped an average of 20%, gold has risen to a 7.5 year high, sitting at about $1,750.90 a troy ounce . Gold is traditionally regarded as a stable investment in times of financial stress, its returns  being based solely on price shifts, not on coupons (as is the case with bonds ) or dividends (as is the case with stocks). Furthermore, the value of gold is normally independent from industrial activity. However, the closing of gold refineries and a reduction of flights due to cor
Read more 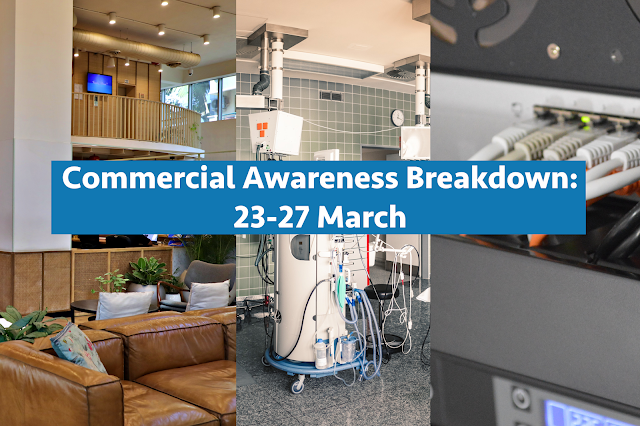 WeWork, Ventilators and UK Networks Commercial Awareness Breakdown deconstructs three of the week's commercial stories in an understandable and jargon-free manner. Terms bolded and underlined may be more difficult to understand and are explained at the bottom. Unsure about what exactly commercial awareness is?  Click here to find out . 1) WeWork American real estate firm WeWork, known for providing shared workspaces for start-up s , is locked in an intense exchange with its financial backer, SoftBank, who state they are now unprepared to buy shares in the company as promised. WeWork has had a rocky history of financial problems. Founded in 2010, the company started off as a success story, but over the past few years a failed IPO , along with expensive behaviour on behalf of the firm's founder and former CEO , Adam Neumann, has caused significant issues. SoftBank, the Japanese conglomerate owning the Vision Fund, gave the firm billions ($10.3 billion)
Read more 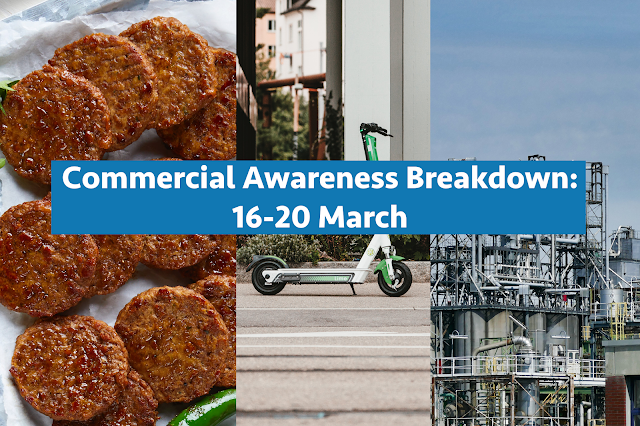 Plant-Based Meat, E-Scooters and Brent Crude Commercial Awareness Breakdown deconstructs three of the week's commercial stories in an understandable and jargon-free manner. Terms bolded and underlined may be more difficult to understand and are explained at the bottom. Unsure about what exactly commercial awareness is?  Click here to find out . 1) Plant-Based Meat US plant-based meat manufacturer Impossible Foods has recently raised $500 million in funds in an attempt to prepare itself against the Covid-19 outbreak, a pandemic which has already caused chaos across multiple markets . The firm's chief financial officer (CFO), David Lee, stated that the raise was carried out primarily "to withstand any short-term shocks". Impossible Foods' rival, Beyond Meat, conducted an IPO last year, but has recently lost half of its value. On the 19th of March, the shares , trading as BYND (its ticker symbol ), were valued at $57.33 per share. One month ag
Read more 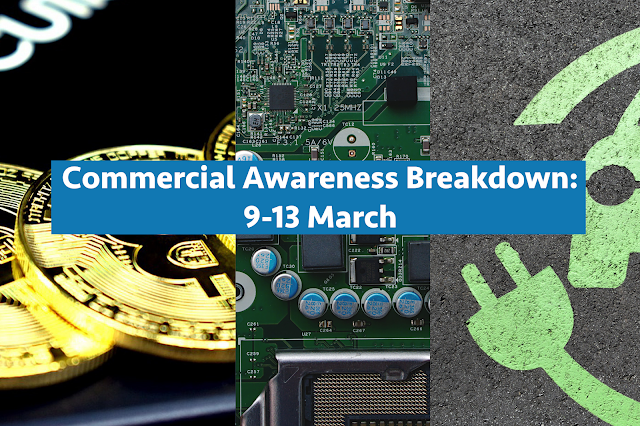 Cryptocurrencies, Quantum Computing and Electric Cars Commercial Awareness Breakdown deconstructs three of the week's commercial stories in an understandable and jargon-free manner. Terms bolded and underlined may be more difficult to understand and are explained at the bottom. Unsure about what exactly commercial awareness is?  Click here to find out . 1) Cryptocurrencies Values of cryptocurrencies across the globe fell sharply this week, with Bitcoin, recognised as the first cryptocurrency in circulation, falling by 50% to $3,800 in almost 48 hours. The currency was worth $10,500 in February. Similarly, Ethereum, another currency who's blockchain has previously been utilised for major financial transactions , dropped to $95, a reduction of over 65% since February.  Bitcoin value over the past month, data provided by Google and Morningstar for Currency and Coinbase for Cryptocurrency. Cryptocurrencies are digital assets, considered property und
Read more
More posts